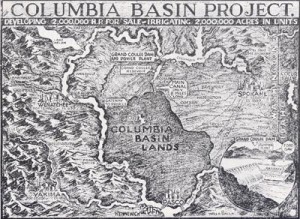 Baptist Network Northwest grew out of a hand-full of churches that left the Northern Baptist Convention in the late 1930’s and early 1940’s and found fellowship together for the purpose of supporting church planting endeavors. Under the leadership of Rev. George W. Kehoe, a group of Baptists in the state of Washington joined together to strategically plant churches in the area of the Columbia Basin Irrigation Project, a massive federal work program authorized by President Franklin D. Roosevelt. 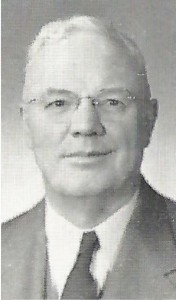 In September 1940 the Columbia Basin Mission was formed, with the purpose of “going where the saving message of the gospel was not preached and to evangelize the new population that will come into that region that is now the Columbia Basin Irrigation Project.” In its first ten years some fifteen mission sites and churches would be started by CBM. In 1945 George Kehoe would leave First Baptist Church in Wenatchee to take a teaching position at Multnomah School of the Bible in Portland, Oregon where he would serve until his death in 1965. 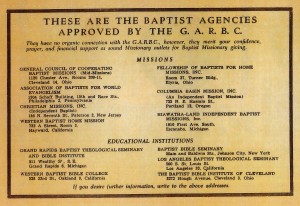 In 1943 the Columbia Basin Mission became an approved agency of the GARBC, and by 1947, there were 12 churches in the northwest that joined the fellowship of the GARBC. With Kehoe’s change in ministry focus from pastor to professor, the mission merged in 1950 with a number of other regional home mission agencies across the country to form a national Regular Baptist church planting organization – the Fellowship of Baptists for Home Missions, with headquarters in Ohio. This change was not well received by pastors in the northwest, who felt a personal responsibility for church planting within our region of the country. Northwest pastors valued cooperation with the national group, but they also valued autonomy and preferred local “grass roots” oversight of church planting. This led to the formation of Northwest Baptist Home Mission in 1957, which returned local control of home missions to our regional pastors. 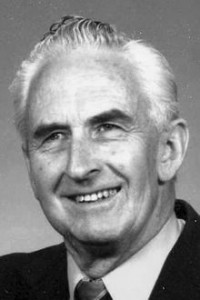 Over the next thirty years, Northwest Baptist Home Mission would partner as District 11 of the Fellowship of Baptists for Home Missions, while maintaining a distinct autonomy from the national group. FBHM struggled financially for years, and eventually dissolved in 1990. Northwest Baptist Home Mission on the other hand has flourished financially, especially due to the brilliant leadership of Pastor Merle Wood and the NBHM Revolving Fund. Beginning in 1957, NBHM began borrowing money from individuals in our churches and paying them 5% interest, and then loaning that money to churches at a rate of 6%. Today, the NBHM Revolving Fund has millions of dollars invested, and has loaned over $12 million dollars in church building loans over the years. What began as the Columbia Basin Mission in 1940 has resulted in over 200 churches and mission sites in the northwest, hundreds of church planters and mission pastors, and in untold thousands of lives touched by the gospel. Praise God for 75 years of ministry in the Great Northwest!

[Read the story of our first 75 years here: NBHM Brochure].

Baptist Network Northwest has been in existence under several different names since 1945. John Ruhlman, in his book “History Of Northwest Regular Baptists,” documents the beginnings of our Fellowship: